Reporting on the EU and European integrations - a challenge for media

Media professionals, representatives of academic community and of journalist associations discussed how the media in Serbia report on the EU and European integration process at the debate "Media Challenge - European Union", assessing that reporting is often in a protocol way and directly related to the political will of the authorities.

The online debate, organised by the project Pulse of Europe – Media Trips to EU was held on 17 February 2020. Assistant professor at the Faculty of Political Sciences in Belgrade Aleksandra Krstić said that researches show that reporting on the EU in Serbian traditional media is often in a protocol way, reduced to the daily politics, without the participation of citizens and with very few experts as interlocutors.

Krstić said that the EU is not the leading topic in the Western European media either, where it does not get more than 10 percent of the media space, but that this share is much bigger when European topics are reported from the national angle. 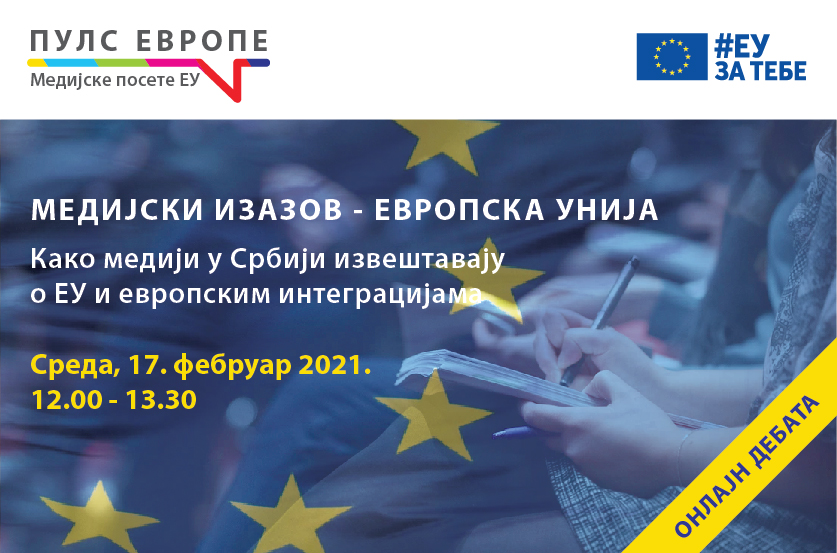 The director of the FoNet news agency and a member of the Management Board of the Association of Serbian Media Zoran Sekulić said that the state of affairs on the public scene when it comes to the EU directly depends on the political will of the authorities. He assessed that, judging by what the press writes and what is happening on the political scene, Serbia’s European integration process is not a dominant topic.

He added that the EU appears in the protocol news and that often the importance of economic cooperation is mostly put in the foreground, while the fundamental values ​​on which the EU is based do not exist on the political or media scene.

"If they exist, it is in those media that are not under the control of the government and are therefore quite marginalized. Their (of media outlets) capacity to reach the public is limited, not only for financial reasons, but above all because they face strong political barriers," Sekulić said.

The editor-in-chief of the European Western Balkans portal Nemanja Todorović Štiplija said that European integration process is most often reported by media from the daily political aspect and that these reports are most often about protocol events such as meetings of Serbian officials with officials of the EU or European countries.

"It can be noted that the domestic media talk about the EU very superficially, in a linguistically and terminologically uninteresting way, which bothers the citizens and distracts them from the topics of European integration," Štiplija said.

The Radio-Television of Vojvodina journalist Ljubica Gojgić said that the media should not be burdened with narratives in reporting on the EU, and that the job of a journalist, regardless of whether he/she is a Euro-enthusiast or a Eurosceptic, is to report truthfully, timely and in respect professional standards. 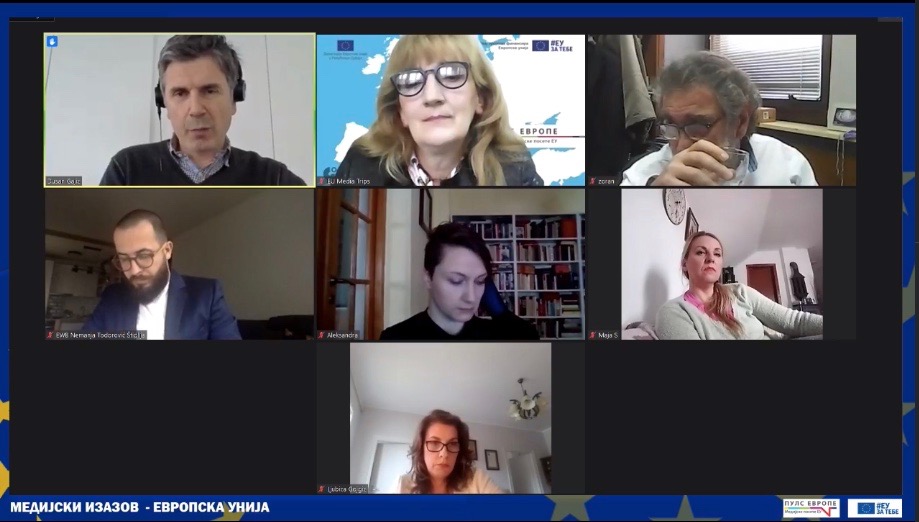 Gojgić said that the EU is a political-economic alliance and that it is logical to be covered on a daily political level. She added that she was not sure that all topics related to the EU can be presented to show what benefits citizens have from it. Media reporting on the EU is “a true reflection of both the media scene in Serbia and Serbian society", where everything is black and white and polarised.

Public service (RTS) correspondent from Brussels, Dušan Gajić, stated that this is how and to what extent European topics are covered by the media is primarily related to the politics. "If there is an interest in Europe from the side of politics, then it will be in the media as well," Gajić said, adding that it is the duty of journalists to monitor whether the process of European integration, which has been declared as one of the main strategic priorities of the state, is being implemented.

The Secretary General of the Independent Journalists Association of Serbia (IJAS-NUNS) Tamara Filipović Stevanović said that this association has been improving the media for years when it comes to reporting on European topics. She pointed out that trainings on IPA funds were organized, as a complex topic for reporting.

The debate was followed by journalists of both Belgrade-based and local media. The editor-in-chief of the Jugpress agency Ljiljana Stojanović pointed out that it would be good to show through practical examples in local communities how the European Union helps a better life for citizens. "As someone who comes from the local media, I advocate this approach to show people through concrete projects and practical examples what the EU is doing for them," she said.

The debate was organised in cooperation with the EU Info Centre. It was announced as the first debate in a series that the Pulse of Europe project will organise with journalists.