Serbs in the city of Trieste - a story three centuries long

The "Jovan Miletić" Elementary School in Trieste, opened almost 250 years ago, is proud of its long tradition, backed by the first Serbian families to inhabit and build the northern Italian city, along with other communities. About three centuries ago, families of prominent Serbian merchants, side by side with others in open Trieste, built the face, streets and the  spirit of the city. Today, about 10,000 Serbs are gathered around the Orthodox Church in the centre of Trieste and a school with a long tradition, as well as a rich archive and library. Their wish is to open a historical museum. Like in the surrounding regions, the language and tradition are nurtured by numerous associations, the RTS internet portal reports in a feature by its journalist Maja Stojanović.

It is estimated that in the area of ​​northern Italy, according to the president of the church municipality of the Serbian Orthodox Church in Trieste, Zlatimir Selaković, there are about fifty thousand Serbs, and in the whole of Italy, sixty thousand. They maintain strong ties, thanks to numerous associations, among which the oldest one is the Association "Vuk Karadžić" with its headquarters in Trieste, which has been organizing numerous events since 1995. One of the fresh initiatives was the establishment of the Cultural Association of Serbian Youth from Trieste, which recently organised a multimedia exhibition about Nikola Tesla.

Ivana Stojiljković, Consul General of the Republic of Serbia in Trieste, says that the Italians, as hosts, showed great cordiality and openness for cooperation. Stojiljković adds that she has launched an initiative of twinning the cities of Trieste and Novi Sad, whose implementation is currently slowed down by the pandemic. The feature is available on www.rts.rs . 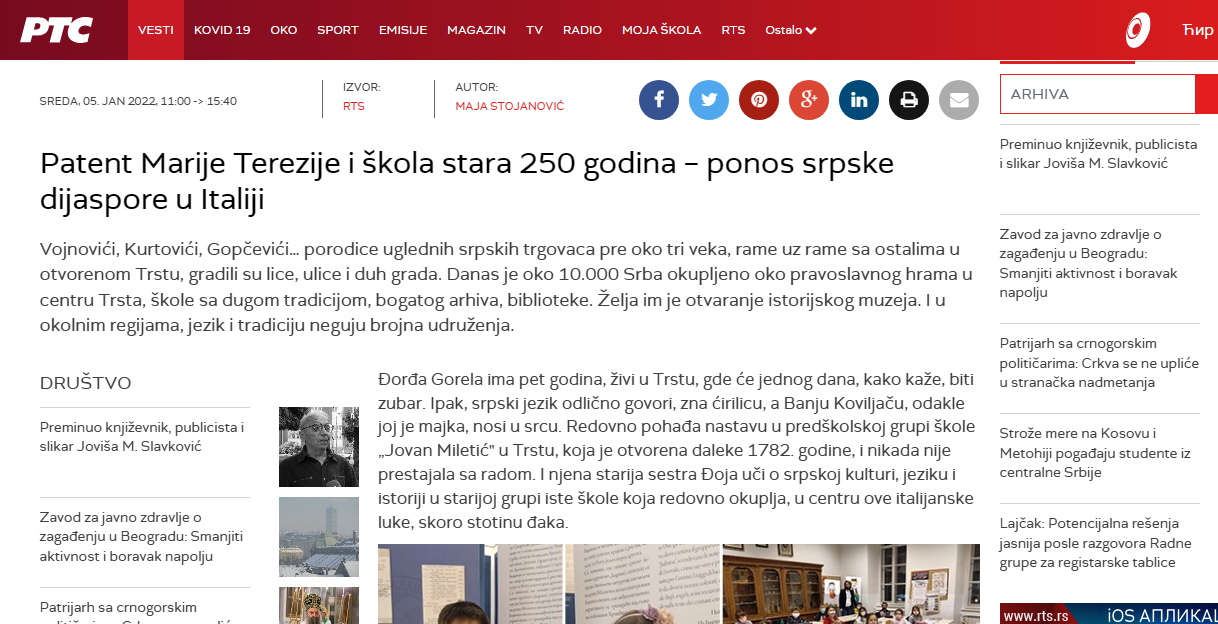