Online debate on Code of Practice on Disinformation

The EU-funded project Pulse of Europe - Media Trips to EU organises a debate on the fight against disinformation which will gather representatives of the European Union, journalistic associations and journalists working with fact-checking media. The debate “Code of practice on disinformation – a step in the right direction” will be held online, via Zoom platform, on Wednesday, 23 February 2022, starting at noon.   Panelists at the debate will be Jasna Jelisić, Head of Western Balkans Task Force at the European External Action Service (EEAS), Ricardo Gutierrez, General Secretary of the European Federation of Journalists (EFJ) Bojan Cvejić, member of the Association of Serbian Media (ASMEDI) Board and member of the Serbian Press Council’s Complaint Commission and Jovana Prešić, project coordinator at Istinomer fact-checking media outlet.

The EU’s Code of Practice on disinformation has been adopted in 2018. By now, it has been signed by major online platforms, trade associations representing the advertising sector and journalistic associations. The Strengthened Code of Practice is in preparation. What is the impact of almost four years of the Code of Practice’s application in the EU public sphere? Can journalistic associations bring more benefits by inviting its members - media outlets - to adhere to the Code and can candidate countries apply the lessons learnt so far in the EU? These topics will be addressed during the debate organised in cooperation with the EU Delegation to Serbia and EU Info Centre Belgrade.

The debate will also be live streamed on the Facebook pages of the project and EU Delegation to Serbia. 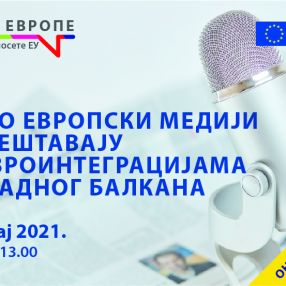 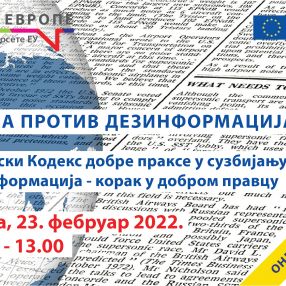 Online debate on Code of Practice on Disinformation